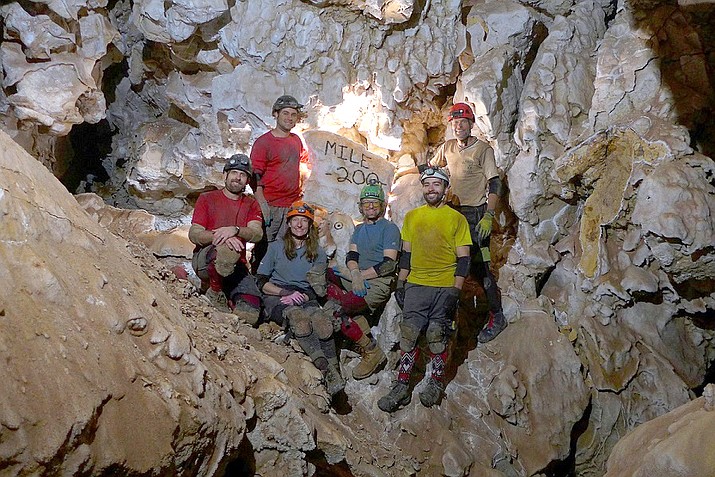 A team of six volunteer cavers entered the cave Dec. 15 and surveyed 3,338.75 feet of passages. They reached the milestone moment Dec. 15, briefly posing for a photo of the accomplishment. Upon exiting the cave Dec. 17 night, the cavers were greeted by park staff, family, and friends for an evening celebration and potluck, and to share their experiences.

Jan Conn also attended. She and her husband, Herb, were instrumental in demonstrating the significance of Jewel Cave. For years, Jewel Cave was thought to be a small cave, with only two miles mapped. That changed in 1959 when Herb and Jan Conn began exploring the cave in earnest. From 1959 through 1981, the Conns discovered more than 60 miles of cave passages. At 94, Jan remains a strong supporter of the Monument’s volunteer exploration program. Since 1981, two generations of cavers have followed in the Conn’s footsteps and have continued to discover new passages, unique formations, and even cave lakes.

A major breakthrough took place in March 2014 in the Splinter Section of Jewel Cave. Since its discovery, over 24 miles of passages have been mapped, with hundreds of open leads that remain to be explored. Because of the remoteness of the area, cavers spend up to four days in the cave, resting each evening at a site called Deep Camp. It takes cavers about eight hours to reach Deep Camp from the visitor center elevators. From there, it takes another four hours to reach the end of the cave. Superintendent Michelle Wheatley said, “Caving is a difficult and demanding activity, and the Monument has been very fortunate to have such dedicated and skilled cave explorers, who love caving at Jewel Cave and keep finding more of this amazing underground resource.”

At 200.3 miles, Jewel Cave is currently the second longest cave in the country and the third longest in the world.

The Monument is planning a 200-Mile Celebration June 28 - 30 in Custer, South Dakota. Guest speakers, youth activities, and an array of presentations are being planned with the assistance of the Black Hills Parks and Forests Association. Registration materials and a complete listing of events will be available by February 1.