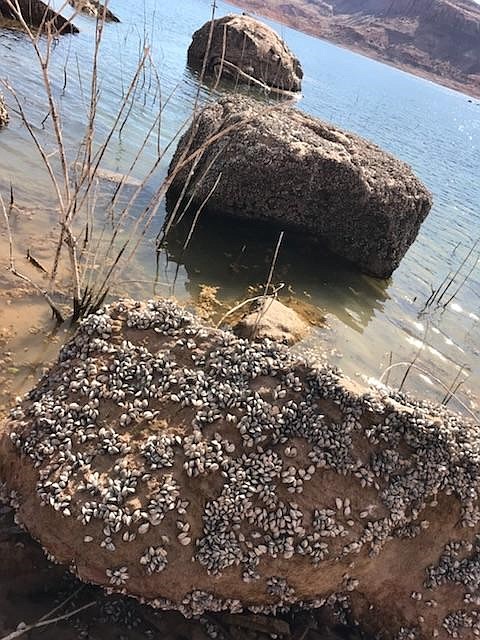 An undated photo shows quagga mussels attached to sandstone ricks on the shore of Lake Powell. the invasive mussels can easily spread to other water sources, warns NPS. (Photo/NPS)

SALT LAKE CITY — An invasive mussel that has taken up residence in Lake Powell on the Colorado River is threatening Utah’s push to develop a $1.8 billion pipeline to deliver water to fast-growing areas.

The Army Corps of Engineers has asked the state to provide a plan on how it will prevent the pipeline from transporting quagga mussels from the lake on the Arizona-Utah border, The Salt Lake Tribune reported June 21.

The 140-mile (225-kilometer) pipeline aims to transport water to Washington and Kane counties in southern Utah. The line is planned to end at Sand Hollow Reservoir near St. George.

Before the Corps will grant a necessary permit for the project, it has given the state until July 13 to produce a plan that addresses the mussel problem and a dozen other issues.

“We could be putting them in the Sand Hollow water supply, and any pesticide used to kill the quagga could pollute the water,” said Zach Frankel, executive director of the Utah Rivers Council — a critic of the pipeline project. “The quagga could interfere with the project itself. They could take over the intake machinery.”

Quagga mussels, which have been in Lake Powell since 2013, have microscopic larvae that could enter the pipeline and disrupt operation, said Jordan Nielson, invasive species coordinator of the conservation group Trout Unlimited.

It’s unlikely the larvae could survive all the way to the Sand Hollow Reservoir, he said.

Methods to prevent the mussel spread include placing filters on the pipeline intakes or treating the water inside the pipe, Nielson said.

Utah law bans transporting quagga mussels from one body of water to another.

The state has not yet finalized a plan, but it might include using a molluscicide, a chemical toxic to snails and slugs. The chemical would need to be approved by the U.S. Environmental Protection Agency and National Park Service, said Marcie Larson, spokeswoman for the state Division of Water Resources.

“We are trying to analyze what technology we have now and what are the best ones to consider,” Larson said. “With water entering the intake, it would be dosed with a molluscicide. Then it would be filtered to remove other biological materials that could be repeated at proposed booster-pump stations.”

The chemical would likely keep the larvae away, but adult mussels would probably need to be physically removed from the intake, Larson said.