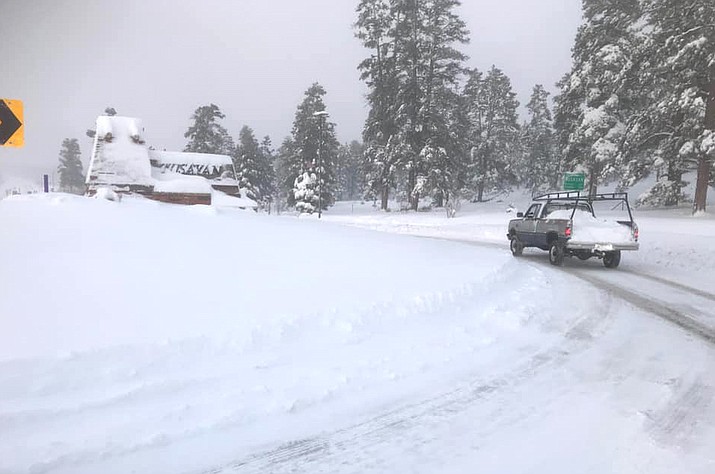 Grand Canyon and Tusayan were without power Friday following a snowstorm. (Town of Tusayan/photo)

GRAND CANYON NATIONAL PARK, Ariz. — A Thanksgiving holiday storm dropped more than a foot of snow at the Grand Canyon, knocking out power overnight at the South Rim and the community of Tusayan.

The town of Tusayan declared a state of emergency as residents and tourists scrambled to stay warm without power.

The town of Tusayan has about 2,500 residents and hundreds of tourists were visiting the park over the holiday.

If you plan to visit the South Rim of the park today, State Route 64 from Williams, Arizona, to Grand Canyon Village has been plowed. > Highway 180 from Flagstaff is currently snowpacked and icy, and remains challenging for low clearance vehicles. #GrandCanyon #Arizona #AZWX

The National Park Service said in a Twitter post that APS hoped to restore electricity by 6 p.m. Friday, but power was not restored until 1:45 a.m. Saturday.

"We have icy, wintry conditions across much of northern Arizona again this morning," the park said on Facebook. "Travel on area roadways remains challenging."

The park recommended postponing travel until Saturday afternoon or Sunday.

State Route 64 from Williams to Grand Canyon South Rim has been plowed. Highway 180 from Flagstaff remains difficult for low clearance vehicles and will be congested with snowplay vehicles.

Coconino County and the American Red Cross set up a shelter at the Grand Canyon last night at the Horace Albright Training Center.

According to the county, Ash Fork is still without power.