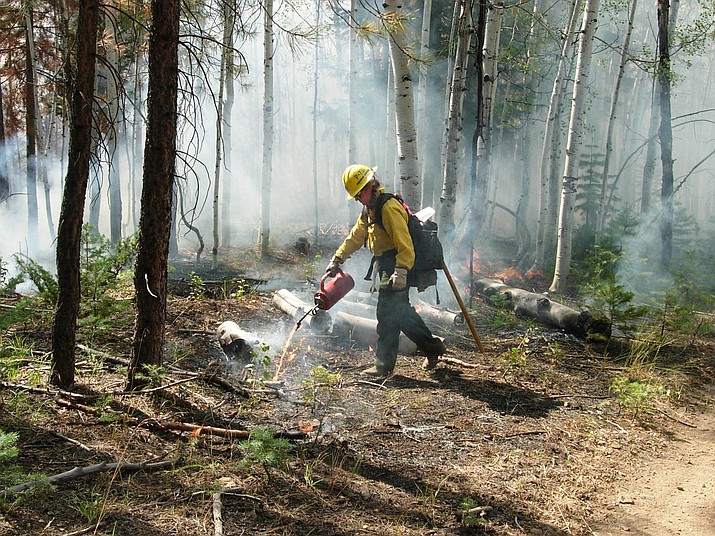 Fire crews have been completing burnout operations over the last week on the perimeters of the Ikes Fire. (Photo/Kaibab National Forest)

TUSAYAN, Ariz. — Fire managers have implemented a plan to stop the growth of the 11,000-acre Ikes Fire, located on the North Rim of Grand Canyon National Park and the North Kaibab Ranger District of the Kaibab National Forest.

Fire crews have been completing burnout operations over the last week along Forest Road 271 from the Grand Canyon rim to the junction of Forest Road 206. On Oct. 1, crews began extending these operations along Forest Roads 206 and 4008, which connected the burnout preparation work to a point on the main portion of the Ikes Fire that burned earlier in the summer. This additional work involved about two miles of fire line burnout, which crews successfully completed yesterday.

In addition to the work along forest roads, the Flaming Gorge Fire Use Module began treating the area along the rim of the Grand Canyon with a burnout process that will prevent any further movement of the wildfire from the plateau area into the canyon. It will also make the area on the plateau resistant to any fire movement up and out of the canyon.

The Ikes Fire remains at about 11,000 acres.Acreage totals may increase as burnout operations are completed over the next few days. In addition to hand ignitions, fire managers have used a helicopter to conduct aerial ignitions.

An expanded area closure is in effect on the North Kaibab Ranger District of the Kaibab National Forest in order to ensure public and firefighter safety during ongoing fire operations. The closure includes the Rainbow Rim Trail area and the viewpoints from Parissawampitts Point to Stina Point. Crazy Jug Point north of Parissawampitts is open. Kaibab National Forest will reopen the area as soon as conditions are safe for public entry. Smoke from the Ikes Fire has been more visible over the last few days due to the burnout operations. Visitors traveling to the area should be aware of possible smoke along Highway 67. Visitors are asked to drive carefully and turn headlights on for safety.